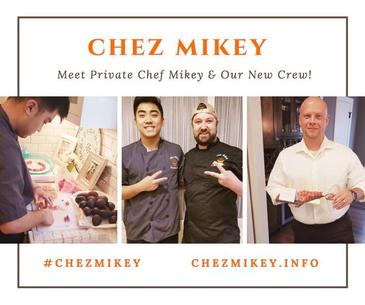 Mike and his team did an amazing job. We hired him to cook for a bachelorette party-group of about 30 girls. He kept in great contact months and weeks before hand. He did a tasting for us, which was amazing. He was willing to do anything we needed/wanted. The food was amazing and there was tons of it! His staff was great the night of, passed appetizers and helped cleaned up plates, even helped refill drinks!! They left the kitchen and all dishs they used nice and clean! I would highly recommend Mike and his team. His bacon wrapped dates are a must!!!

15 reviews
Chez Mikey catered our recent baby shower and we were so pleased with how everything turned out. Mike was super accommodating of our needs and worked within our budget. The menu turned out fantastic thanks to his recommendations, and we had so many compliments on the food! We will definitely be hiring him again for future events and would recommend him to anyone! Jessica Sherry
I just hosted a baby shower at my house this past weekend and we had Mike take care of the food! To say it was incredible is a huge understatement. Not only was the food delicious but it was also beautiful. I have hosted several parties in the past and I have never been as satisfied as I was on Sunday. Mike and his staff were so kind and helpful and incredibly punctual! We could not have asked for a better outcome! If you are looking for someone to cater your event! Mike and his staff are the way to go!! Cassidy Mann

Daniel Kim My brother in-law (far left and Middle photo) He's been my everything during our bigger events passing appetizers, cooking, chopping, and dishwashing. Randy J Harnicker (far right) is our Dining Services Manager and has been an integral part of our team since 2018! He is everything from Bar tender/Drink mixologist to Expert Server with over 17 years of experience! He is great with both kids and adults.

​​was born and raised in Deerfield, Illinois  and was exposed to a wide array of cultures early on. Culinary excellence was in Mike’s DNA with Swedish, Italian, and Hungarian blood. His Italian grandmother was the first to take Mike under her wing and teach the basics of Italian American cuisine as her mom had passed down to her. Learning most importantly the art of pasta making, bread making, sautéing, and frying.

To make it even more interesting Mike’s parents were foreign language teachers. His father was a French teacher at New Trier High school and ran an exchange program. Mike's father would have French faculty stay at his house during the exchange and then stay with them during the trip to France. On Mike’s first visit to France he actually slept above an Artisanal bakery, waking up each day to the smell of baguettes and croissants. This is where he learned his first ice cream and sorbet recipes and got to see french bakers for what they really were in the morning, shirtless, and often potbellied food buddhas. He took his first driving lesson (unbeknownst to his parents) in a stick shift car before eating authentic Tarte Flambée (Alsatian pizza) and being told to finish his first glass of red wine as the French don’t waste!


Believe it or not despite Mike’s wonderful food journeys and early exposure to such an immense variety of food, Mike's palate was initially very limited. He did not like to eat what he did not understand. His curiosity and desire to learn helped him overcome his own food insecurities as he was known for not enjoying Thanksgiving Dinner until he was in his late teens! Nonetheless this fueled his eagerness to learn more and overcome his pickiness.

In his late teens Mike had the wonderful opportunity to work at Ej’s Place in Skokie. He started out here as a dishwasher and worked his way up to salad chef. This was Mike’s first big culinary challenge as the cooks spoke no English and the recipes had no measurements! Mike was able to master a couple of potato dishes there and learned how to shuck oysters, clean and devein shrimp, and how to clean large quantities of lettuce.


Mike would later work for 3 years selling spices and hot sauces in Wisconsin and Chicago farmers’ markets with Let's Spice it UP out of Highwood, Illinois. This was a great experience for Mike as he learned to make spice blends, how to pick the best spices, and how to maximize the flavor with the use of spices.


Mike's culinary mission took a slight break during the college years but  quickly returned afterwards. Mike worked in a retirement home for one year in California. This job required him to cook for over 100 people twice per day and helped hone his high volume cooking skills. This job would ultimately get him in the door of his next job, Farm Artisan Foods in Redlands, California. This farm to table restaurant was exactly the cup of tea Mike needed to finish his fine dining training. He had eaten there a couple of times and after badgering the chef for a sit-down he finally got a chance to stag (working for food and experience in a restaurant) After two days of staging he  was hired as a garde manger. Within a couple of weeks he was on hot appetizers, followed by entrées, and finally sous chef. At this position he oversaw production of focaccia, sourdough, homemade pasta, sauces, soups, and ran the restaurant’s catering program. On weekends he would oversee the catering of up to 300 people for weddings and graduations while cooking food to order for walk ins! After a year of back breaking hours Mike hit a culinary plateau and needed to take a step back from this ever challenging world of food. During this break is when Mike Koerner started to go back to his roots with food. Remembering what got him into it in the first place…It certainly was not foams or sous vide. In fact, at first Mike was not a fan of all the extreme gastronomy that came up during the late 2000s and all of that “Fusion food”…Mike started to just cook, going back to old recipes and reworking them over and over again. His focus was to find the nuances of flavor and how to concentrate his favorite ones. Eventually Mike would let go of his fear of the new and embrace all of the wonderful technology of our modern times. He just wanted to make sure he was not cheating with it. How embarrassing if you can not make a meal just because you don’t have your Nitrous cartridges or xanthan gum. Ultimately Mike's style is more on the natural side of life and though he is willing to play with some space age stuff, he really gets excited by concentrating flavor with traditional methods. Over the course of the last 6 years Mike has realigned his chi. He has put himself in the shoes of the consumer. He is going places and eating, experiencing new flavors and then going back home and playing with them like an artist with new colors. He has matured in the right way, not forgetting where he came from not afraid of what the future brings. Knowing that at the end of the day that some things don’t need to be changed at all. Being a chef you have to embrace the new but Mike also makes it very clear that he wants to keep our traditions alive.


Mike's more recent years have been blessed with the addition of his Partner, his wife and full time supporter Diana Kim. Diana being of Korean heritage has exposed Mike to a whole new world of flavors. Mike was extremely excited to start learning about Korean food and is still just tapping the surface of this wonderful culinary gem. He has learned a few recipes that have now been tried and tested by Diana. He is excited to share some of these new recipes and also some of his Korean inspired creations like the Kimchi Burger.


Mike has taken a long, winding road to get to this point and Diana was a catalyst in the creation of this idea. Mike understands now that being a chef is just who he is. No matter what work he does he will always be a chef. When Mike travels and eats other people’s foods he is calculating in his head how he can bring the essence back to his own kitchen, so that he can share the same feeling with someone else. Mike loves the nuances of the process and knows that when someone puts love into the food that you can taste the difference.